Ping pong rules can confuse many beginners. It doesn’t help that the rules keep changing as the sport continues to evolve. It helps if there’s someone nearby who can help you understand basic ping pong rules.

Even though you must learn several ping pong rules, this article will point out the most important ones to know. These basic ping pong rules will help you become prepared for competition using ITTF rules. Basic ping pong rule #1 – Never move the table or put your free hand on top of the playing surface while the ball is in play. For instance, let’s say you’re reaching forward to hit a shot that’s close to the net. If you crash into the table or your free hand balance itself as you return the shot, a point is awarded to your opponent. It makes no sense to give away points.

Basic ping pong rule #3– The ball must not spin and be tossed upwards when serving the ball. They implemented this rule to keep players from putting an extra spin on the ball. It helps to toss the ball with an open hand to keep spin levels down.

Basic ping pong rule #4– The ball must be hit when traveling downward on the serve. The ball must be in play above the playing service. It’s not legal to serve the ball below the table by “scooping” it up.

Basic ping pong rule #5– The table tennis racket must be black on one side and red on the flip side. This rule applies both to a racket that has the rubber on both sides or if you have contrasting rubbers. 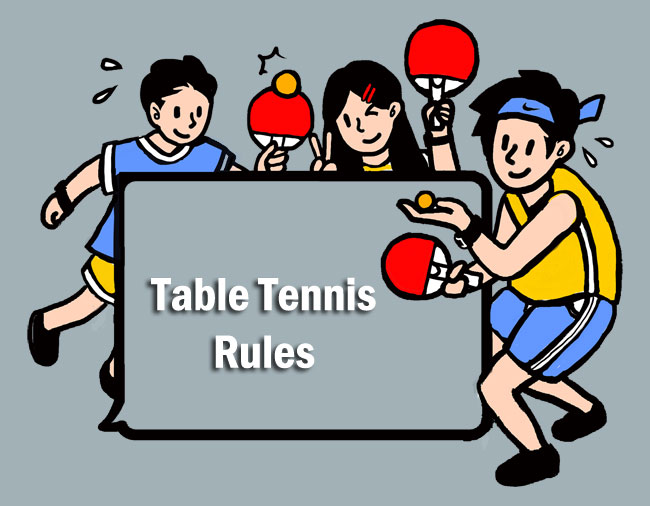 The basic rules include rules for starting a game, scoring points, and rules for serving. These basic rules are all you need to know as a beginner, and they will be sufficient for you to develop your game and improve your techniques.

In official competition, a match-winner is a player that has the best of any odd number of games, usually the best of five or seven games.

Rules for Starting a Game

According to the official rules, a coin is tossed to decide which player will serve first in a game.

A player can also hide the ball in one hand and put both hands under the table for the other player to guess which of the hand the ball is hidden.

They can also use the play-to-serve system to decide who to serve first in a game. The ball is played back and forth four times, and then the players play out the points. The player that wins the point will be the first to serve.

How to score points

The rules to serve

Do you want to know the important basic rules of table tennis for beginners? Or do you wish to have yourself become familiar with table tennis laws, including the official table tennis rules for professional and international players? If so, you have come to the right place to get all the required information on this site.

ITTF preserves a global position ranking system plus organizes several international table tennis events, including the World Table Tennis Championship. Today, the organization already has got 215 members. If you want to know more, you may get the official table tennis rules indicated in the ITTF laws of table tennis handbook.

The rules associated with table tennis or ping pong can be categorized into 2 major categories:

Knowing the current official table tennis rules is imperative for serious amateur players who want to improve their game.

For a beginner or recreational player, the knowledge of some basic rules of the sport is sufficient to play and enjoy the game at that level.

Some of you might also be wondering about the difference between ping pong rules and table tennis rules and want to know which of these terms is officially correct according to the rules and regulations governing the sport.

As a beginner, you can relax, take your time to learn the game. All you need is to know some basic skills like how to start a game-knowing who to start or receive the first service of the game. You also need to know how to choose and use the table tennis racket, paddle, or bat.

As a beginner or recreational, you only need a cheap table tennis racket, and as your game improves, you can upgrade to a more high-quality but expensive racket.

I will give you some important basic table tennis rules for beginners to develop your skill and have a fundamental knowledge of playing the game according to the rules.

With serious amateur players who are really determined to improve their game standard or take their game to the championship level, they need to know the correct official rules and regulations of table tennis because the rules are reviewed every year.

As a serious player, you must know about any changes made in the sport’s rules to know what to do and what not to do when playing a game in a tournament or your table tennis club.

The official table tennis rules are complete laydown rules and regulations intended to cover any possible occurrence that may arise when a professional game of table tennis is played.